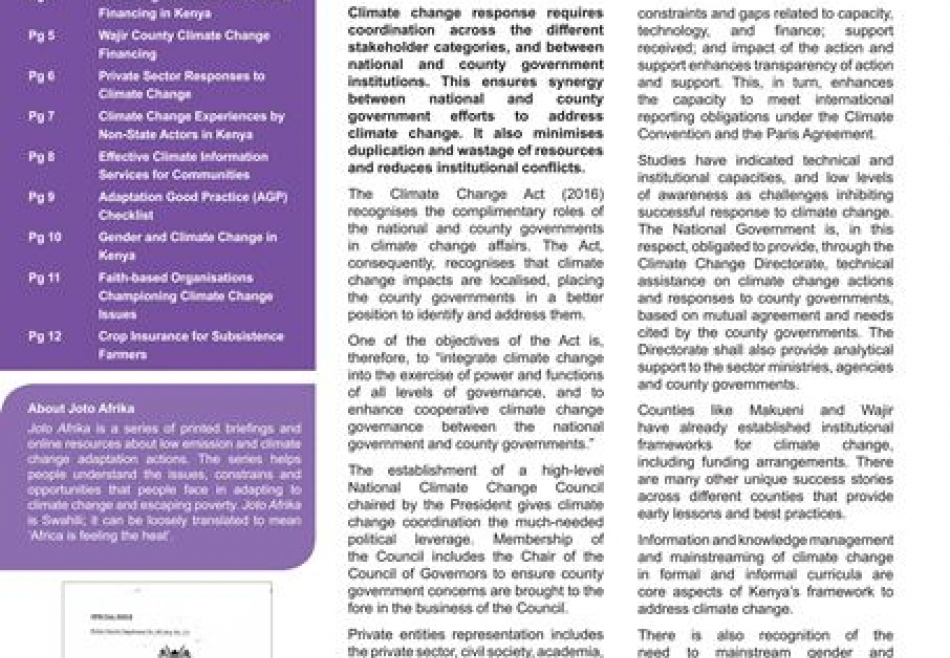 Journals by admin July 6, 2016
Editorial
Climate change describes larger than normal variability in weather and climate parameters, especially rainfall and tem- perature. The cause of climate change has been debated by critics. But the time for debate is long past. Unless we act more proactively, hundreds of millions of people will face more drought, more oods, more hunger and more conflict. That is why Kenya is not waiting. Kenya is taking bold adaptation and mitigation actions to combat the impacts of climate change.
Climate change is reducing grain yields and causing food prices to rise steeply, especially in Africa. Lower grain yields and food price spikes could lead to a 20 percent rise in malnutrition among children in Africa. Variable rainfall patterns are likely to constrain fresh water supply, compromising hygiene and increasing the risk of water-borne diseases, which kill over 2.2 million mostly children under ve years of age in Asia and Africa. Climate change is creating the perfect storm, with pandemics invigorated by warmer climate, water scarcity, hunger and malnutrition, and changes in disease vector ecology.

According to World Health Organisation (WHO), the direct cost to health, excluding costs in agriculture, water and sanitation, is projected to reach $2-4 billion annually by 2030. The World Bank estimates that $75 billion will be needed annually to deal with the impacts of climate change such as tropical diseases, decline in agricultural productivity and damage to infrastructure owing to sea-level rise. Climate change is an existential threat to “Our Common Future”, which requires much greater responsibility at individual, community, national and global levels to return our planet on a path of equitable and sustainable development.

This special issue of Joto Afrika for the 21st Conference of Parties to the United Nations Framework Convention on Climate Change (COP21) presents a collection of articles, which demonstrate Kenya’s commitment and leadership in addressing the impacts of climate change The Government of Kenya understands its obligation both to its citizens and the community of nations with respect to taking decisive and appropriate measures that contributes to abating Greenhouse gas emissions, as well as enhancing resilience to the climate change impacts. Through its Intended Nationally Determined Contri- bution (INDC) Kenya has embraced a low emission and climate resilient development strategy. Kenya understands that the time to act is now.
The country is in the process of nal- izing its Climate Change Bill 2014 and the Climate Change Policy Framework. These provide a legal and institutional framework for mitigation and adaption to the effects of climate change; coordination mechanism for formulation of programs and plans to enhance the resilience of human and ecological systems against the impacts of climate change; measuring, veri cation and reporting of climate interventions; guidance and measures to achieve low carbon climate resilient development.
Moreover, initiatives such as investments in geothermal energy generation, estab- lishment of a sub-national adaptation fund (County Climate Change Fund), building a national greenhouse inventory to estimate emissions and removals from land based activities and the wide use of solar lanterns and cook stoves, in Narok and Samburu, demonstrates that the Country understands the urgent need for decisive action. This November, the world will converge in Paris at COP21. COP21 may not produce a global deal. But I think we all have a moral obligation as citizens of the world to act responsibly and preserve the planet for posterity.
COP21 must be about you and I, our communities and what our nations can do to curb global warming.
read more
Alex O. Awiti, PhD Director, East African Institute of the Aga Khan University alex.awiti@aku.edu
Spread the love
Tags:
0Likes 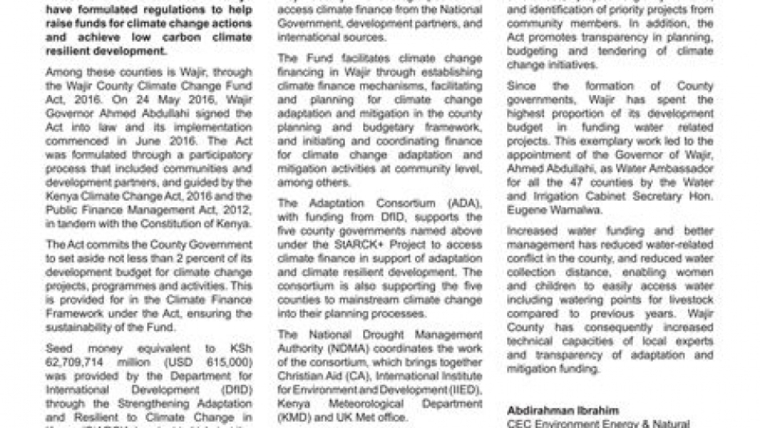 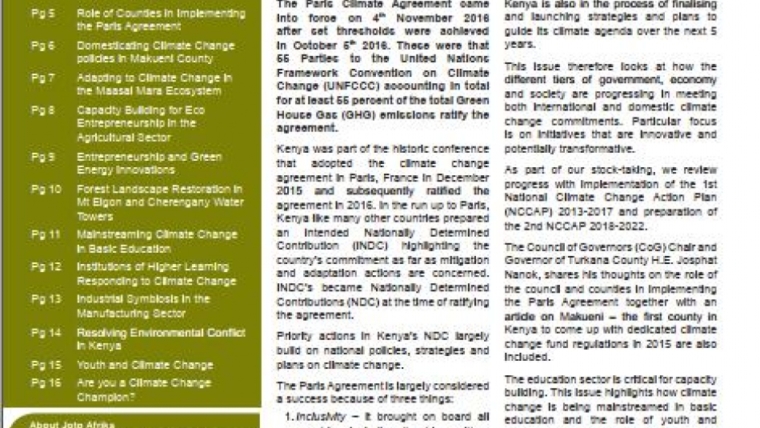