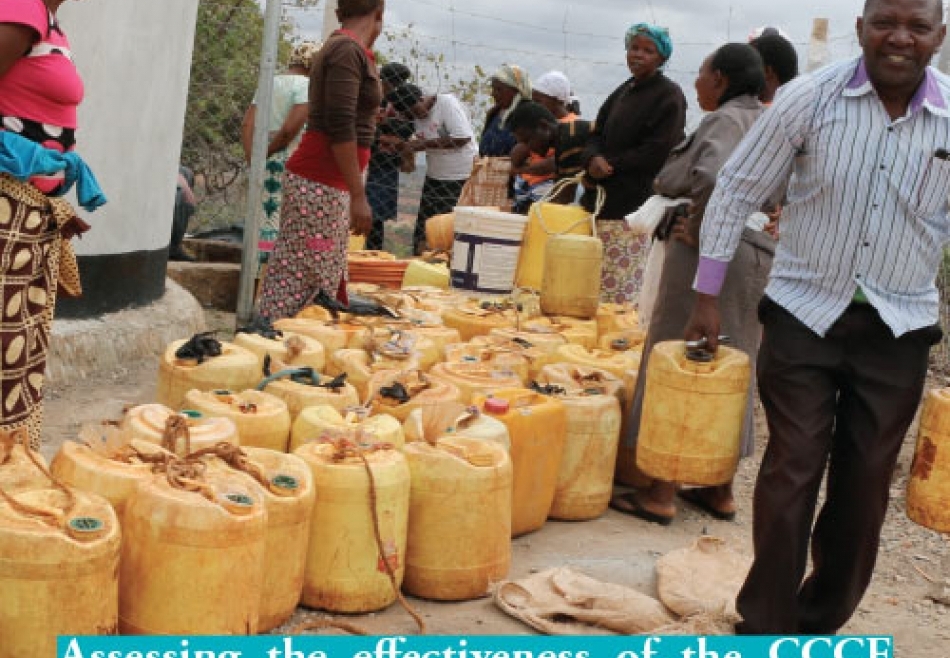 The County Climate Change Fund (CCCF) Mechanism has been pioneered by the Ada Consortium in five Counties in Kenya since 2012. The aim is to support the National Drought Management Authority’s Strategy Plan 2018-2022[1] which aims to enhance drought resilience and climate change adaptation. The approach is four-pronged – establishment of a County Climate change fund that enables communities to plan, implement and manage public good investments that enhances their resilience to climate change; establishing County- and Ward-level climate change planning committees; development of and integration of Climate Information Systems into adaptation at all political levels; and a Tracking Adaptation and Measuring Development framework.

This report focuses on the first two. We seek to learn from the three most-advanced County pilots – in Isiolo, Makueni, and Wajir Counties – to enable efficient scale-up that delivers enhanced drought resilience and climate adaptation. We collected data from a range of stakeholders on the costs associated with implementing the CCCF Mechanism from Ada Consortium partners, surveyed 369 households, 30 key informants from County- and Ward-level Climate Planning Committees, and ran 30 focus group discussions at community- and Ward-level with a focus on gender groups and other potentially marginalised groups.

We find the CCCF Mechanism to be Value-for-Money (VfM), cost effective and delivering genuine impact. It strongly points to the potential for transformational change across the Arid and Semi Arid Lands (ASALs) landscape in Kenya, and beyond. However, the learning reported here must be taken into consideration, and learning itself better integrated, mainstreamed and standardised into all future CCCF Mechanism projects in Kenya, and beyond. Challenges include the lack of qualification and quantification of experience, which both limits learning and the scalability of the CCCF Mechanism, refinement of the existing operations, learning form the implementation, and understanding the precise impact on the ground. This report aims to provide some of the answers sought.

The level of investment by development partners in the CCCF Mechanism in the three Counties was £866, 387 since 2011. The investment per beneficiary is between £2.52 – 8.31 and by household between £18.18­ – 48.85.  These are minimum figures, and may omit investment in some aspects of the CCCF Mechanism by development partners (on development of the Climate Change Act), by both the Government of Kenya and County-level authorities (in supporting activities on climate change and rural economic development), and by communities (in decision-making, constructing, operating, delivering and governing projects that enhance climate change resilience).

The estimated level of direct economic value created by these changes is £3.1-3.2 million per annum. This is equivalent to an extra 10% of household income per annum. This is a minimum figure, and omits value created from direct and indirect benefits of climate change resilience uplift, access to water, recognition of community voices in policy processes and capacity built as part of the CCCF Mechanism – including management techniques and negotiation. Furthermore, indirect benefits may include reduced costs for some national investments, such as the National Drought Emergency Fund[2] and may be relevant to include.

Depending on how these projects progress we can expect these direct economic benefits to persist. Indeed, many projects are leveraging on the direct economic value created through the CCCF Mechanism as a catalyst for generating flows of indirect economic value in communities, with schools expanding, healthier herds, market gardens, Small Medium Enterprises (SMEs), and a range of other livelihood-enhancing activities reported.

There are a number of issues which need to be strengthened in the three Counties and integrated into plans to embed CCCF Mechanism in other Counties. These include: ensuring the roles of WCCPC and CCCPC members are fully understood, that inclusion is a focus, and critically that communication between County, Ward and Community is enhanced.

Some stakeholders are currently missing from the supply chain, and need to be integrated. Specifically the external private sector should be invited to understand how best to integrate their needs and willingness to participate in current and future CCCF Mechanism projects.

Our survey and approach here was constrained by time, and will be revised in future iterations. For instance, we were unable to ascertain how well the CCCF Mechanism works with other initiatives in the field. Clearly, this is a key factor for both national and county government and reporting on the complementarities the CCCF Mechanism brings to the devolution process.

Furthermore, we propose further learning is conducted to understand better how the Operational Fund is used; how communication can be improved among Counties, Ward and Communities; how to tailor the approach based on population density and other unique characteristics of Kenya’s Counties and Wards, to ensure delivery of drought resilience and climate adaptation. 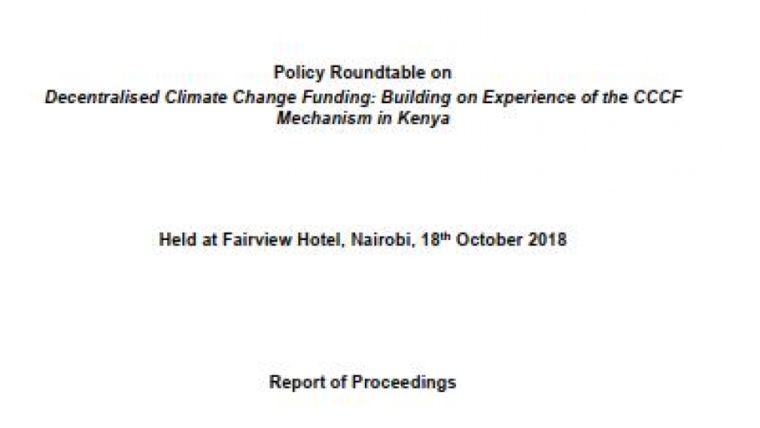 Policy Dialogue on Decentralised Climate Change Funding: Building on Experience of the CCCF Mechanism in Kenya 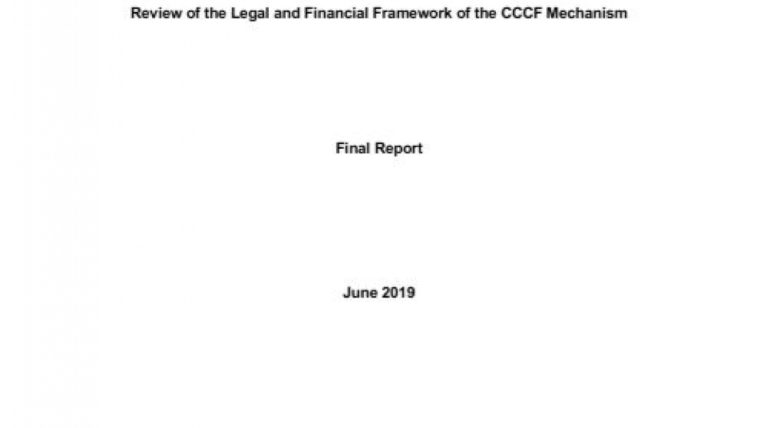 Review of the legal and financial framework of the CCCF Mechanism